BBC consultation: tell them to include Scottish Greens 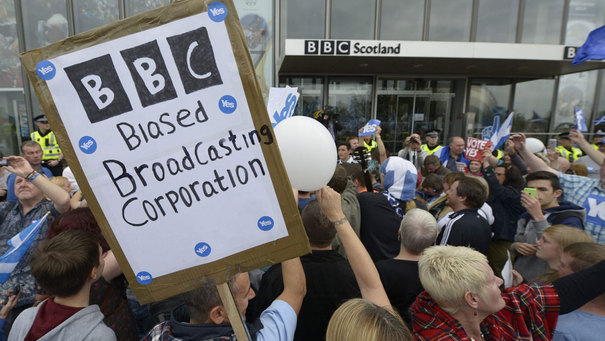 Once again the BBC has relegated the Scottish Greens to receive inferior coverage in the elections. You can sign a petition, or respond to the BBC's consultation. My response to the consultation is below.

1. Are the proposed Guidelines and Appendices relevant and appropriate for these elections? Please explain why.
I am dismayed to see that the appendix classifies the Scottish Green Party as a 'smaller' party, meaning that it will not be given parity with the SNP, Labour, Conservatives, and Liberal Democrats in the debates. Arguably, the Scottish Green Party is today far more popular than the Liberal Democrats. Scottish Greens saw a surge in membership after the September 2014 independence referendum, quadrupling the number of party members. Opinion polls consistently show Patrick Harvie, leader of the Scottish Greens, as the most popular leader of an opposition party in Scotland. Many in Scotland believe that the BBC is not in touch with local political conditions, and that it is is biased toward a unionist agenda. Treating the Scottish Greens on a par with the SNP, Labour, Conservatives, and Liberal Democrats is essential if the BBC is to demonstrate impartiality and fairness.

One may also raise the question as to whether UKIP deserves parity in coverage. In Scotland, their case is far less clearcut than that for the Greens. So far as I am aware, UKIP has not seen a surge in membership (a search on 'UKIP Scottish membership surge' only brings up stories about how UK-wide Green membership outstripped UKIP in January 2015), and the leaders of UKIP do not approach Patrick Harvie in popularity within Scotland.

The political situation in Scotland differs greatly from England, and it is vital that BBC regulations for Scotland reflect the unique nature of politics north of the border.

Posted by Philip Wadler at 05:11 No comments: 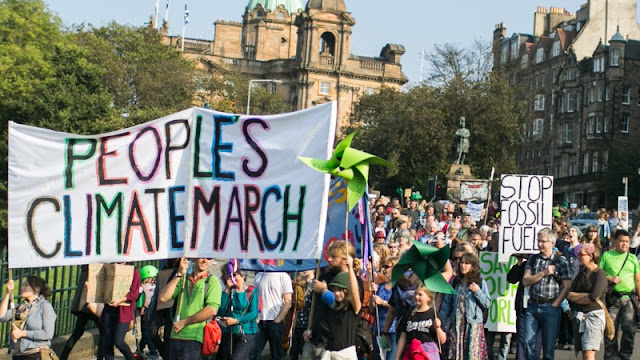 It's now or never for the planet. Details from www.stopclimatechaos.org/march.

Join the worldwide movement marching for a better future.  Over the weekend of 28th and 29th November, people across the world will march for climate action: from Melbourne to Tokyo and from Mumbai to Buenos Aires.
In the build up to the UN climate change negotiations in Paris, we are standing up for people affected by rising global temperatures and demanding that world leaders agree an ambitious deal.
Recent tragic events in Paris mean that planned climate marches there have been cancelled.  So it's more important than ever that people across the world take to the streets in their own countries to call for climate action.  Join us in Edinburgh for Scotland's Climate March!
A low carbon society will create green jobs, improve our transport and food systems and protect our land, air and water.  Scotland needs to show its colours in Paris and beyond with strong action on climate change.
Wear your brightest colours as Scotland marches on this weekend of global action.

What to expect at Scotland's Climate March
11:00 Pre-march activities: join a church service, banner-making workshop, recycled instrument workshop or music workshop see below for more information
12:00 Gather at The Meadows (near Middle-Meadow Walk)
12:30 March sets off: heading down Forrest Road, across George IV Bridge and then down the Mound
Once the march arrives at the Ross Bandstand in Princes Street Gardens (West) the rally will kick off.  The rally will be compered by actor and comedian, Hardeep Singh Kohli, and feature live music from Colonel Mustard & the Dijon 5 and Jo Mango and a great lineup of speakers, including young people, politicians, a crofter, a Filipino climate activist and more.
15:00 Rally ends

To prepare, have a look at Naomi Klein's This Changes Everything, a fantastic primer on the issues, the challenges, the failures and successes to date, and the way forward. 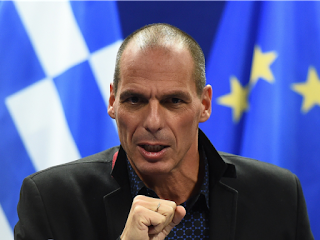 "London and southern England have moved away from the tradition that cemented Britain following the great war and the second world war, the one-nation tradition of a mixed economy combining free markets with a state sector that intervened, provided the national health service, and so on and so forth. That post-war concensus, from let's say 1920-something to 1974-75, has collapsed now and southern England has moved in a neo-liberal direction of its own. And if anything, Scotland has remained faithful to that tradition. You’ve got southern England effectively heading in its own direction away from that which created a one-nation consensus in Britain. So it’s they that are abandoning ship, not Scotland." — Yanis Varoufakis interview, 12 November 2015

Posted by Philip Wadler at 03:04 No comments: 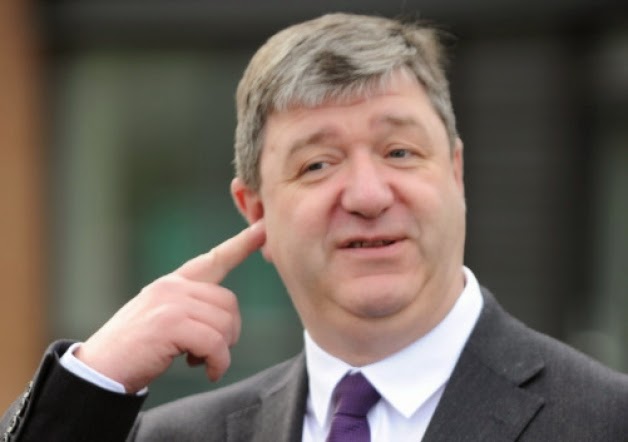 This morning, John Humphrys and Norman Smith on the BBC Today Programme pushed to keep alive the Telegraph's smear against Nicola Sturgeon and the SNP (segment begins at 2:40:00).

Friday night, the Telegraph released a story that Sturgeon had claimed in private she would prefer Cameron remain as PM, without checking first with any of the principles involved. Within minutes, the story was categorically denied by Sturgeon, and within hours categorically denied by the French Consul General and French Ambassador who were supposedly quoted in the secret memo. Secretary of State for Scotland Alistair Carmichael (above) admitted his office was responsible for the memo, saying "these things happen". (If the story had broken a few days earlier, that last phrase would have convinced me it was all an April Fool.) Cabinet Secretary Sir Jeremy Heywood has ordered an inquiry into how the memo was leaked.

No mention of any of these facts in the Today Programme segment, only an argument as to how, despite the memo not being fact, it might still in essence be true. More and more, I am losing my faith in the BBC, and increasing my conviction that Scotland needs to run its own national media.

See also Zoe Williams in The Guardian, and Alex Salmond in The National.

Posted by Philip Wadler at 09:39 No comments:

The demonisation of the Scots 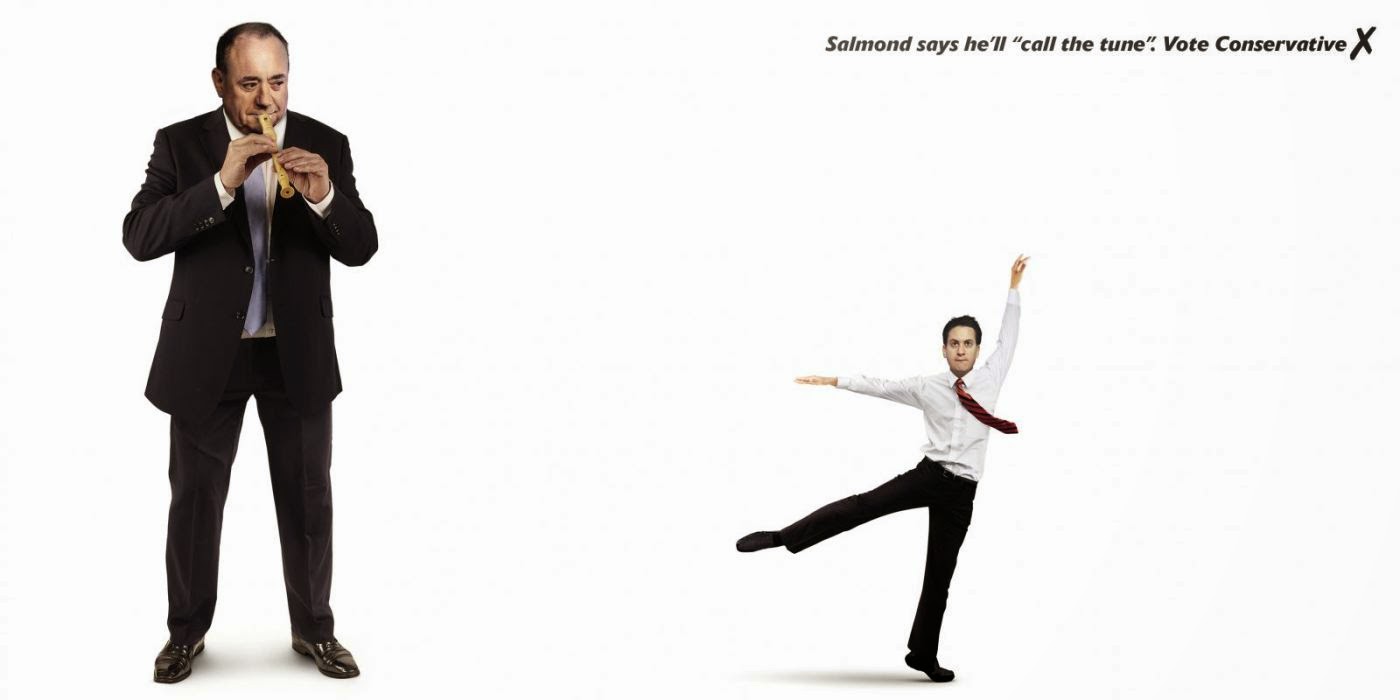 Above, a Conservative Party campaign advertisement. At bottom, a misogynistic excerpt from the English Sun on 10 March 2015. (It didn't run in the Scottish Sun; the two often run articles that are diametrically opposed.) And here, a transcript from an interview with Nicola Sturgeon on the Today Programme, 28 March 2015 (interview begins at 1:50:30). The transcript doesn't capture the way John Humphrys speaks over Sturgeon, in order to call her arrogant three times in arrow.

Humphrys: Put yourself in the position of somebody in an English constituency listening to a Scot saying we can lock the Tories out of government. It's entirely possible the Tories will win the most seats, certainly the most votes, in England, and yet here we have a Scottish leader saying we can lock them out of government even though we ourselves want to be independent of that country. It's surpassingly arrogant, isn't it?
Sturgeon: Governments at Westminster have to be able to command a majority. Firstly, it's a matter of simple arithmetic that if there are more anti-Tory MPs in the House of Commons then Tory MPs then we can choose to lock the Tories out of government.
Humphrys: I know, what I'm saying is that it looks incredibly arrogant of you.
Sturgeon: Let me come onto that in a second.
Humphrys: No, no, I take the arithmetical point. But it is breathtakingly arrogant of you. You want independence yet you're saying that we're going to deny the English people the government that they want.
Sturgeon: Let me speak to the listeners in England. You know Scotland right now, just as a matter of fact, has a Tory government when the Tories have one MP in Scotland. Now in the UK it is who can command a majority.  What I'm saying is the kind of policies that the SNP would want to pursue in the House of Commons I think would find support not just in Scotland but in the UK. But the fundamental principle here is that if you want to be the government in the House of Commons then you have to command the majority, and if the Tories can't command the majority then they don't deserve to be the government.

Am I the only one who finds Humphrys argument profoundly anti-democratic? Demon = No Dem. 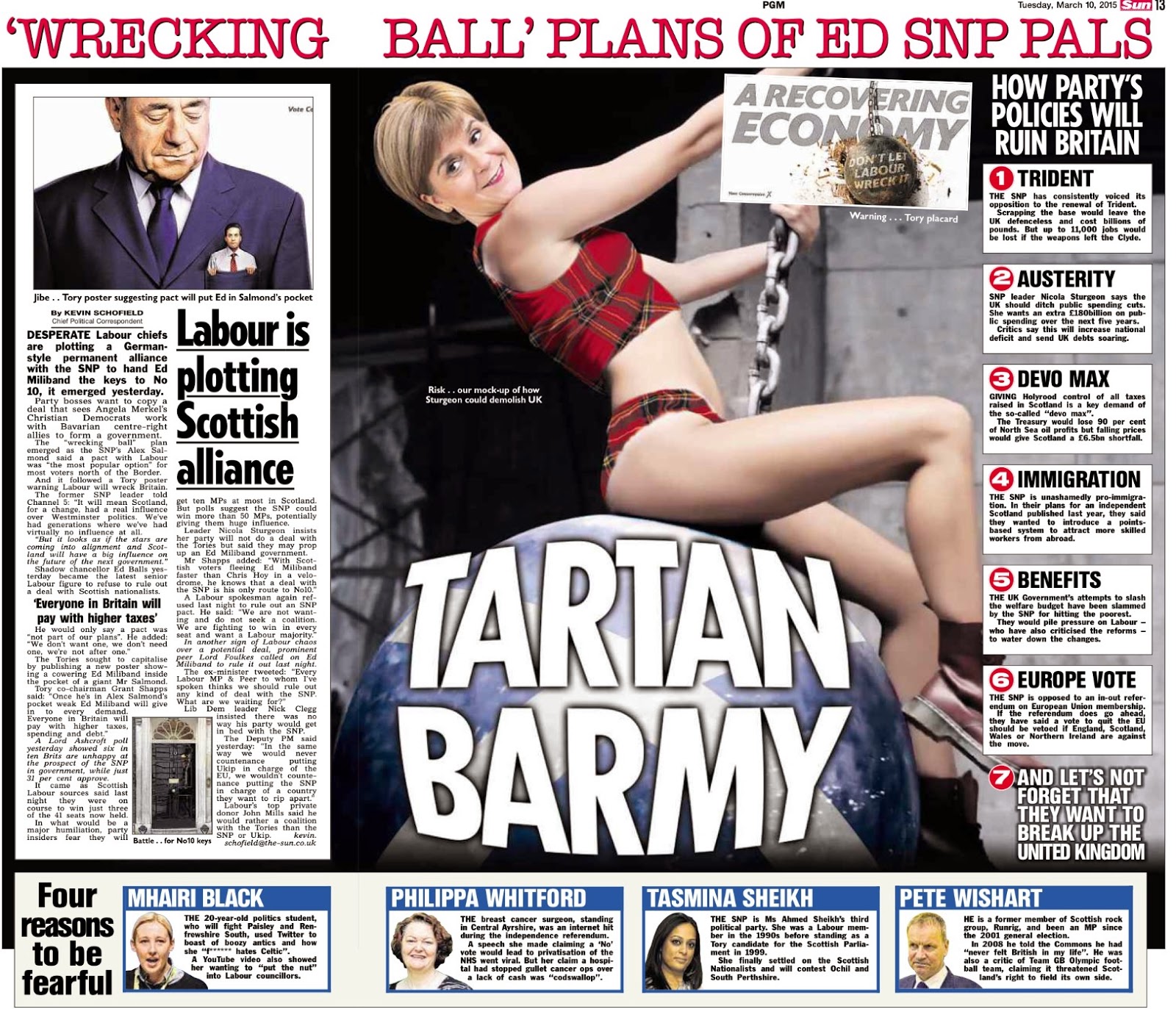 Posted by Philip Wadler at 05:45 No comments: 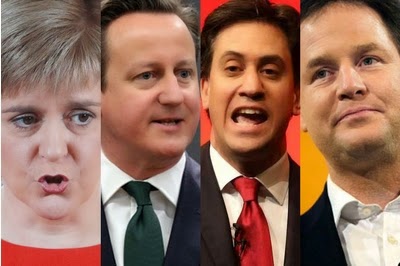 Labour keeps banging on `Vote SNP, Get Tory', claiming that the party with the most seats will get first crack at forming a government. Common sense says this is cobblers, and it turns out the high-ranking civil servants agree with common sense. From Common Space.


THE civil servant who was crucial to forming the current UK government has said that a deal including the Scottish National Party is a “feasible scenario” based on current polling figures.
Sir Gus O’Donnell - whose name is abbreviated to ‘GOD’ inside the political establishment - made the comments to The Guardian when questioned on the implications of a hung parliament.

And from the Guardian.


O’Donnnell said: “The one thing we need to be aware of is people thinking that what Nick Clegg said last time constituted an iron law that only the biggest party, somehow defined either by seats or votes, gets to have the first say. That is not true.”
He added that current polls suggest the most likely government would involve a Labour-Lib Dem coalition supported by the SNP. “If you look at the numbers that looks like a feasible scenario,” he said.

59% of Scots want a second referendum within ten years A survey by Survation shows 59% of Scots would like a second Independence referendum within ten years. Only 20% said they would never like another referendum. But the same survey shows that if another referendum was held today, it would come out No again, 52% to 48%. Surprising all those folks want another chance to vote No ...
Posted by Philip Wadler at 10:40 No comments: